PEDALING IN THE CITY 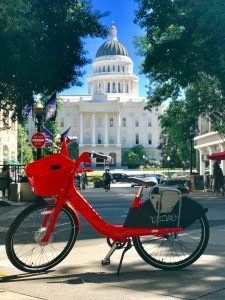 Sen. Bob Hertzberg’s Press Secretary Katie Hanzlik has discovered a new way to get to get around town – a bright red bicycle. She is one of several members of the Capitol community who has tried Jump Bike, an electric bicycle sharing system that launched in May. Hanzlik started using the bikes soon after they popped up – riding them from her midtown apartment to the Capitol, Raley Field and Tower Theatre. Each bike is equipped with a cargo basket, GPS and a motor that adds to the power the rider puts into the pedals, a feature that Hanzlik really likes. “The bike is cool and they are electric-powered,” she said. “It’s easier to get to where you’re going.” The company, which was recently acquired by Uber, started with a fleet of 300 bikes available in Sacramento, West Sacramento and Davis. Austin Heyworth, public affairs manager for Uber in California, says 600 additional bikes will be in service by the end of the summer.

To rent a bike, users need to download the Jump app and set up an account with a four-digit PIN. The app features a map showing available bikes nearby. Upon locating a bike, the user must enter their PIN on the bike’s keypad to unlock it. The cost is $1 for the first 15 minutes and seven cents each minute after that. At the end of a ride, bikes are to be locked onto a bike rack within the system’s operating area. Each bike comes with a large U-shaped bar that goes into two holes on the side of the bike to lock into place. Ryan Endean, director of media relations for the American Lung Assn. in California, rented a Jump bike to get back to his office at 16th and I Streets after having lunch at Punch Bowl Social near the Golden 1 Center. He said returning the bike was easy; he was able to find a bike rack near his office. But, he’s noticed that not everyone has left the bikes in appropriate places. “I’ve seen a lot of the bikes locked to parking meters and sign posts, and that’s not ideal,” Endean said. “I think it’s a great service but the bikes could become an eyesore if people just randomly ditch them around town.”

Earlier this month, Asm. Kevin McCarty used a Jump bike for the first time. He intended to use it to make a quick trip from downtown to his house, but ended up going on a 13-mile ride along the American River Parkway. He made the impromptu ride in a dress shirt and slacks but said the electric boost kept him from getting too hot. “When I got home, after an hour and a half, I was warm but if I had been riding my bike for an hour and half, it would’ve been really different, I would’ve been all sweaty,” McCarty said. He thinks the bikes will help efforts to reduce traffic congestion and improve air quality. “The big picture is, we want to encourage people to get out of their cars and utilize public transit, bike and pedestrian activities a bit more,” McCarty said. “This will help spur that activity.” Amy Thoma, director of public affairs for Kaiser, agrees with that sentiment. She recently used a Jump bike instead of her car to get from her downtown office to an appointment at Kaiser’s new health facility at 5th and J Streets. “It was easy and convenient, and a fun way to get around,” Thoma said.