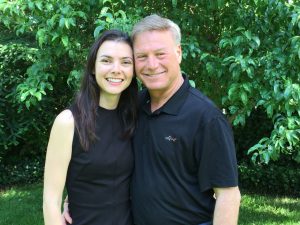 They didn’t always have the same taste in music, but classic rock, pop and hip hop helped KCRA-TV political reporter Mike Luery form a special bond with his daughter, Sarah Luery. “When she was a little girl, I put together mixtapes for her of the Beatles and The Beach Boys,” Luery said. “I guess you can say we’ve always had music between us.” What started as a fun hobby has turned into a labor of love for Sarah, who recently wrote a full-length musical titled, “Monotony: The Musical.” It features 25 original songs and is scheduled to be released April 15 as a free podcast with seven episodes. Sarah wrote the book, while her friend, Jared Chance Taylor, composed the music. Sarah has a bachelor’s degree in journalism from USC and a master’s degree in sociology from CSU Northridge. She says the idea for the musical came to her about a decade ago while working at a tedious job. “I had this thought, ‘this monotony will be the death of me,'” she said. “I remember being struck by the phrase and jotting it down. That phrase would go on to be the first line of Montony’s opening number.” And so she wrote the story of Herbert, “a timid accountant who longs to be free of his day job but is terrified to quit for fear of disappointing his deceased father” and who learns to follow his inner voice to live life on his own terms. Sarah says she and Chance Taylor initially developed the piece for the stage, but about a year ago, decided the musical should be a podcast instead. “We thought it would be really neat to create theater that people can experience from anywhere, at any time they want, free of cost,” Sarah said. Growing up, she played a little piano and flute, but it was the music passed down by her dad that was surely an inspiration. “I still remember being struck when I played my dad’s copy of The Who’s ‘Quadrophenia’ for the first time, I had no idea that theater could be a purely auditory experience,” she said. “I am so grateful to my dad for always communicating with me through music such that I could one day use music to find my own voice.” And it was important to Luery that his daughter experience music of all genres, even if it meant enduring a concert he wasn’t jazzed about. “I remember taking her to a concert featuring Jay-Z and 50 Cent, when she was a teenager,” Luery explained. “It wasn’t exactly my kind of music, I’m more of a classic rock kind of guy, but I wanted to encourage Sarah’s interest in exploring all musical worlds and now she has done that.” Each year around Sarah’s birthday, Luery still sends her a mixtape featuring tunes by new artists and classics like The Rolling Stones and Bruce Springsteen. “I still have every mix tape he has ever made me, and many of my favorite memories involve music that my dad and I have in common,” Sarah said. Luery says he’s so proud of his daughter and the passion she put behind her musical, which he thinks is being introduced at a time when people need something to smile about. “Times are tough right now and we all need something positive in the world,” Luery said. “I think Sarah can inspire others just as she has always inspired me.” Contact: Luery, mluery@hearst.com.